Sample Chapter from my novel-in-progress 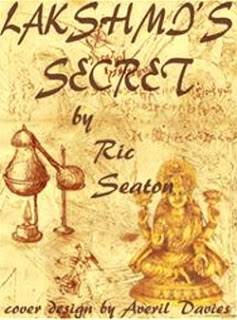 High above a warm hillside in the Aravalli Mountains of northern Rajesthan, a buzzard mewed.

It swept a tight circle in the blue and gazed down at the man and three young boys far below who were bent over the side of a well shaft.

They were busily paying out rope which ran over a wooden beam pulley and disappeared into the darkness of the deep hole.

Udai, a thin man in his forties, was peering down into the darkness. He who wore a white dhoti, and this was the fourth well they had examined since sunrise.

He muttered instructions to the boys in Marwari, “Carefully now. Don’t drop him down too fast or he might miss something important.” Then he called down impatiently, “What can you see, Roop?”

Fifty feet below him, ten-year-old Roop gripped the side of the basket in terror as it creaked and bumped against the walls of the shaft. In his other hand he held a torch, from which beads of flaming tar rhythmically dropped to the rocky floor below him, buzzing like angry hornets and illuminating the terrifying drop on their way down.

“Stop here,” he yelled at the tiny circle of blue above him.

His downward journey stopped abruptly. Reaching out, he detached a small object that had snagged itself on the rough surface of the rocky wall. He held it up to the light of the torch, realised what it was and dropped it with a scream.

Seconds later the desiccated human ear landed in a pool of burning pitch and crackled like a moth in a candle flame.

“Roop? What was that, what happened?” called Udai.

“Look for anything unusual. Signs of loose stones or maybe an entrance,” called the disembodied voice, “even a box of some kind.”

The basket reached the bottom, panicking a rustle of green lizards to bolt for their hiding places, whilst the blackened ear continued to burn, crackling as it quickly filled the shaft with the smell of barbecued pork.

Roop kicked loose stones and soil over it. The last thing he wanted was for his hand-woven taxi ride to catch fire before he made it back to the surface. He strained his eyes in the dimness, peering around at the walls.

His bare foot caught on something sharp. It was then that he realised he was being watched.

The floor of the well was a deep carpet of broken human skulls. Empty eye sockets had followed his slow progress down the shaft over the last ten minutes and were now laughing silently at his fear.

He swallowed hard, trying to keep a lid on his fear. They would tease him for days if he cracked.

He jumped as a few pebbles rattled down the shaft, one of them catching his shoulder and making it sting. He raised his free hand over his head, but no more stones followed the first flurry, and now all he could hear was the hiss of falling sand and the mew of a honey buzzard. Then silence returned.

He paused, stilling his jangling nerves, and carefully picked his way through the bone yard. Each footfall was accompanied by a loud crack as a skull popped like a broken coconut. The sound reverberated around the well space and added even more adrenalin to his already saturated blood stream.

“Shri Udai? There are only old bones here, sir. It’s just a well.”

“You can’t see anything else? Check every inch. We won’t be back here again.”

Roop moved closer to the side of the well, and began to walk around its whole circumference, now carefully avoiding the smiling faces beneath his feet. He had almost completed the circle when the torch flame jumped and roared.

He stopped and held the torch close to the wall, moving it back and forth. Something didn’t look right. The shadow of the stones was uneven at this spot. He reversed back a few steps and then approached the place again.

Sure enough, the flame dipped towards the wall again, drawn by a draft that pulled at it.

“Uncle?  Just here. I think I found something.”

Roop watched regretfully as his lifeline was whisked up the shaft and disappeared from view. His hand was involuntarily drawn to wall, and he stroked it across the suspect bricks. A few of them lurched and fell with a thud onto his bare toes, causing him to call out again.

He was accumulating a fine collection of bruises today. Shruti would be furious with uncle Udai.

“What are you doing, Roop? I told you to wait for me.” His uncle was halfway down the shaft now, and Roop could hear the welcome creak of the basket as it returned, and the wavering light of Udai’s torch danced across the white heads at the bottom. He shivered in the heat.

There was now a sizeable hole in the wall where the mud bricks had been stacked.

Moments later his uncle was stepping through the skulls towards him, accompanied by loud cracks and pops.

“There must be fifty people down here,” said Udai in disbelief. Roop was relieved to have company. His linked his arm through that of his uncle and tried to move closer.

Udai was only interested in the wall. “Stop being a baby,” he snarled, “and clear these stones away. You’ll never be a man if you get scared by the dark.”

“It’s not the darkness, uncle. It’s ... them. They were watching me.” He pointed at the skulls and shook violently. Udai would have none of it.

“They’ve been dead for years. They’re almost dust themselves now. They can’t see you.” He laughed. Roop could hear the older boys at the top laughing as well. Tears brimmed in his dark eyes and he sniffled.

“Give me your torch and start clearing those bricks away right now.” he ordered, snatching it from him.

Roop jumped nervously and felt lost without the torch in his hand. It had been a comfort to hold it and feel the warmth on his face, to smell the burning tar and hear the friendly wafting sound of its flame. It could even have doubled as a weapon if the dead people had tried to attack him.

Once he had cleared the bricks away, he could see that a huge shelf had appeared in the rocky alcove. It was perfectly flat, and had obviously been prepared very carefully. His uncle held both the torches in front of him, clearly illuminating the space.

Whatever it might once have contained, it was now empty. Apart, that is, from one tiny object standing at the back of the alcove. It was smiling at him with a look of both understanding and apology.

Udai’s face paled and he said a quiet prayer. He knew immediately what it meant.

A brass statue of Lakshmi, the Goddess of Wealth was sitting on a lotus flower, her arms outstretched in an embrace. She was often placed close to valuable objects to offer them protection against misfortune.

At the top of the well, the boys were dozing in the sun, enjoying a well-earned rest. A broken Khejri tree scattered sangri fruits over the slope. It leaned its weight against the lower wall of the dilapidated building near the top of the hill, threatening to push it over as it sagged in the heat.

‘Suraj, old friend,” growled Udai. “What was Lakshmi protecting? What have you done with it?”

The buzzard mewed again as if in answer, piercing the shimmering silence with its cry. Then it veered away towards the purple line of the mighty Himalayas two hundred miles to the north.
Posted by Ric's Words at 05:47 No comments:


Hi - My computer system was knocked over Christmas and I just got it all backed up and re-installed.
So here we are.
Happy New Year, and this is a long-standing hobby of mine.
PUNNING!


Rambo - Shepherds will enjoy this movie based on the novel by David Morrell, in which a Vietnam veteran Devon Longwool uses his combat skills against the lawman of a small town after he is arrested for loitering...  Here's my pencil sketch of Rambo under stress... 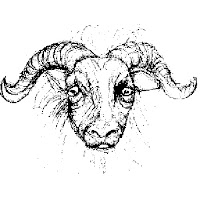 I'm Richard Seaton and I am a professional writer 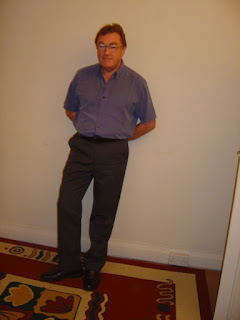 I write in many different genres and under more than one nom de plume.

Beginning in January 2016 I'll be posting very regularly here - mainly for my own benefit - as a way of motivating myself to write more, and to keep track of my projects. Like most writers, I also love to have my work read and to receive constructive and positive critique.

I have a novel in draft right now which is nearing the completion of it's first re-write. I'll be posting extracts from it for criticism as it nears completion.